Apoxyomenos at the Palazzo Medici 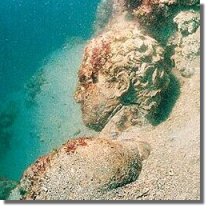 A captivating ancient bronze statue of "Apoxyomenos" is on show at the Palazzo Medici Riccardi until January 2007. This statue is a first century BC copy of a 4th century BC original and was found in about 45 meters of water off the coast of Croatia in 1999. The exhibit has an extensive and detailed presentation of the discovery and conservation of this magnificent antiquity (there are some more photos and information here). Highly recommended if you are here in the next few months. The 5€ admission to the palace also includes the regular museum, including the Gozzoli frescoes.