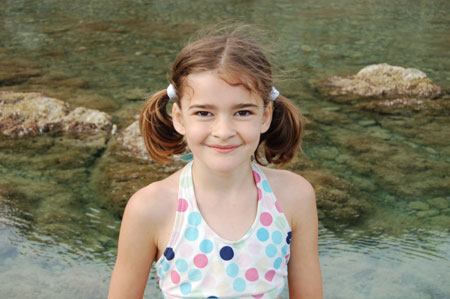 Random snippets from Firenze: Not that you would know it as a tourist, but the Italian national soccer team has set up in Florence for their pre World Cup training as the scandal rages.

Buses (ATAF) and taxis have been on strike randomly for a day at a time the last couple of weeks. Not sure for the reason of the bus strike (maybe this), but the taxis are supposedly out over the the city's plan to issue several hundred more taxi licenses. Of course this would dilute the value of current license holders, so the existing cabbies are not happy about it. Personally, with the level of traffic already in this city, even with all the pedestrian areas, I can't see how more taxis are going to make things better.

It was a warm week, but the weather is set to turn cooler for the next few days. Sunday we went to the beach at Castiglioncello (that is Jane above, standing in front of one of the tide pools), south of Livorno, which was fun. It seemed like a very chic little town and probably would be a great place to spend some time in the summer.