Duffy, the photographer of Swinging London


The National Alinari Museum of photography celebrates the genius of Duffy, the photographer of Swinging London. Duffy became a photographer only in the second half of the 50’s, following a period as a stylist.

The Sunday Times commissioned him for his first job and, at the same time, he started a collaboration with Vogue.

Thanks to his avant-garde, youthful style, Duffy completely transformed the mood of the magazine, which until then had been aimed mainly at high society. 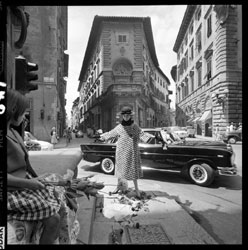 Duffy used the same style as two other great artists, David Bailey and Terence Donovan, and together they introduced a new documentary technique in photographing fashion. The photographer, from being a worker behind the scenes, became a star. In 1961, Duffy started to work for Elle France and this stimulating collaboration continued for 20 years.
A selection of Duffy’s editorial works are being exhibited in Florence. This task was made all the more difficult due to the fact that in 1979, Duffy gathered together all his negatives, took them in the garden and made a bonfire of them, maintaining that he had already said everything he could say through photography. Duffy died in 2010.
Archive research has brought them back to life. Duffy’s son Chris has restored them over recent years.

The exhibition is organized in three sections - Moda/Fashion, Volti/Faces and Denaro/Money. It offers the rare and unedited opportunity of looking deeply into one of the most important photographic archives of that epoch.