Italy's streets of art at risk from vandals 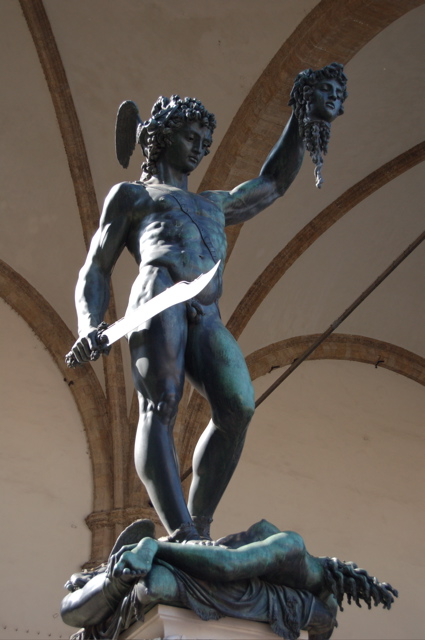 Interesting article in the Guardian today with a byline from Barbara McMahon in Florence. The piece asks a lot of interesting questions, opening with:

"Are Italy's artistic and architectural treasures too precious to remain outside in streets and piazzas, at the mercy of vandals?"

Much of the article is specifically about certain works in Florence, including Ammanati's Neptune (known locally as Il Biancone - The Great White One) which was damaged just this past August, and Cellini's Perseus (pictured) that stands in the Loggia dei Lanzi:

"Leading art historian Mina Gregori believes more works of art in Italy should be removed from unprotected positions and put away safely in museums and art galleries. As an example, she cites the bronze sculpture of the Greek hero Perseus holding aloft the Gorgon's head, which has been restored and put back in the same location in Florence in which it has stood since 1554. 'It is simply absurd that one of the greatest masterpieces in the world should remain exposed to bad weather, pollution and vandals,' she says. 'It should be taken away and put in the Bargello and replaced by a copy.'"

Even though I have personally observed many people in the few weeks I have been here touching and leaning on the base (which is a replica - the original base is in the Bargello) of this particular sculpture, I find it hard to agree with Gregori's postition on this - part of what makes this particular sculpture so amazing to see in the Loggia is that it has been there for nearly 500 years. Replacing it with a copy would cheapen that feeling - in this particular case, if the piece can stand the weather, let it stay for now.

You can find the whole article here.